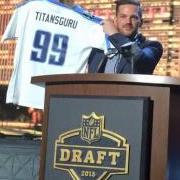 Finally collected them all. LFG.

I'm really hopeful they cut Humphries and keep Davis with the lower salary cap next year.